Do people in the industrialised world get parasites?

please note this section is under construction

Intestinal parasites are living organisms that find a way into a host organism and live by helping themselves to the nutrients consumed by the host.  Parasites are very well evolved for survival and can be difficult to eradicate.  Many parasites thrive in human intestines but most parts of the body can be infected.  I recall a case some years ago in America where a tape worm had taken up residence in the brain of a young man.

It is believed that about 50% of Americans have an abundance of parasitic organisms in their gut, and up to 85% have some sort of parasitic infection! It is likely that a similar proportion of people in the UK are playing host to unwanted guests.  Most people in the UK have had an infestation of threadworms during childhood. And whilst your doctor may tell you that parasitic infestations are rare I would tend to disagree and say perhaps uncommon but more prevalent than people imagine.

During my career as a colon hydrotherapist I have seen a variety of different parasites (threadworms, tapeworms and ascaris) passing through the viewing chamber of my colonics machine.  Now given that I am not a medical doctor I would not dream of diagnosing anything so I have a worm jar in my clinic.  When I see something interesting coming down the tube, I catch it to show the client and ask them what they think it is.  A worm is a worm and we are all able to identify one.

As I have said, parasites have evolved for survival and are used to hanging on inside your intestinal tract, so if you have a colonic and don't see any worms it does not mean you don't have them.  Often, once a parasite remedy or medicatin from your doctor has killed the parasites, the proteins are absorbed by the body so you may not see them then either.  I have however had clients call me after colonics or when they are taking some of my products to report that they have spotted parasites in the loo after using it.

One client saw something long and stringey on the side of the toilet bowl after her morning ablutions and on further examination, when she touched it with the end of a pencil, it wound itself round the pencil.  Another, who I suspected might be carrying parasites and had been unwell for some time, called me one morning to report having just passed a "grapefruit sized ball of green things, the size of a woman's index finger with skin like a crocodile".  Horrified, the client had flushed the toilet without getting a sample.  And after passing more, a sample was taken and passed to Bradford Royal Infirmary who promptly lost it. That was a shame because the Hospital of Tropical Diseases were keen to get access to it as they had never heard of such a parasite and thought it might be a new discovery.

The same client had a large lump in her upper abdomen.  She was getting heavier, was full of gas and passing hardly any faeces, even though she was eating well, and very little was eliminated during the colonic even though she had not had a proper bowel movement for weeks. I had a hunch that the lump could be a granulomas tumour full of parasites (which was odd because at the time I didn't know such things actualy existed, I just had a feeling about this strange lump) so I instructed her to go back to her doctor asap.  It took more than a year to get her doctor to agree to arrange an ultrasound.  When she finally had the procedure guess what, the lump was a tumour packed with parasites and there were others scattered around her abdominal cavity. Even more strange, she was sent back to me for more Oxy which is what she had been taking when the first ball of guests was eliminated.

On another occasion a client, who had recently returned from post-Tsunami Thailand passed a large ascaris (about a foot long) during a colonic.  When she went to her doctor he told her not to worry as there would only be one!!!

So, I know from experience that people in the UK have parasites because I have seen them.

How Do Human Beings Pick Up Parasites?

Parasites enter the human body through the air we breathe, the food we eat, the water we drink (and wash our food in), from insect bites, unprotected sex, oral sex, through cuts and abrasions (especially on the feet), from pets and farm animals and from other people (threadworms). Tapeworms are particularly creative.  They can be picked up from eating undercooked fish, beef or pork but they also can shed tiny pieces of worm which exit the body and can wiggle along looking for a new host, really vile!  Tapeworms should be very rare in this country owing to the way we farm but since people now travel widely they still occur.

In developing countries parasites are much more prevalent.  I have often had clients who have picked parasites up whilst travelling in Vietnam, Thailand, India, Africa and Pakistan.  In such countries the most common way to encounter parasites is through contaminated water but that's not just the water you drink, it's the water you swim in too (eg white water rafting in Vietnam), and eating uncooked food (such as salad) that has been washed in contaminated water.

I found this video on Facebook this morning and it sheds some light on how people in developed countries can pick up parasites.  Parasites in fish are common.  Only buy the very best quality fish!

There are thousands of human parasites that take many forms. Here is a roundup of a few of the  more common ones you may encounter: 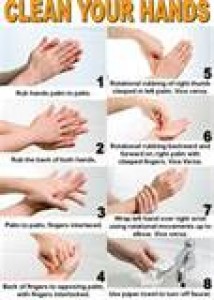 Giardia infection causes giardiasis. It is a single celled parasite. It is caught by:

​It is worth noting that a study read some years ago found that faeces contamination was very common in gyms and health clubs.  Traces of faeces were found everywhere.  Bowls of free snacks on bars are also best avoided owing to how many people do not wash their hands after using the loo!

What to Do if You Think You Have Giardiasis

Drink plenty of water to avoid dehydration and go and see your doctor who will prescribe antibiotics, asap.  In the meantime:

​When you have finished your course of antibiotics, take a course of probiotics to replenish bowel bacteria and or use  the Total Gut Therapy Pack to restore balance and perk up your digestion.  A course of colonics can also be helpful.

​How to Protect Yourself From Giardiasis

Ascariasis is an infection caused by Ascaris lumbricoides, which is a species of roundworm.

Infections caused by roundworms—which can be as small as one millimeter or as long as a metre—are relatively common. Ascariasis is the most common roundworm infection. According to the World Health Organization, as many as one billion people are infected by Ascaris lumbricoides worldwide.

The Ascaris lumbricoides roundworm reproduces inside the intestine. The worm goes through several stages:

Ascaris worms are picked up by:

Environmental risk factors for ascariasis include:

Ascaris can produce no symptoms at all initially, and potential symptoms vary depending on the life cycle of the parasite and where the eggs or larvae are in the body.

Symptoms associated with roundworms in the lungs include:

Roundworms in your intestines cause the following symptoms:

Some people with a large infestation may experience other symptoms, such as fatigue and fever. A major infestation can cause extreme discomfort.  You may have all or many of the above symptoms if you do not receive prompt treatment.

Ascariasis can also cause complications including bowel obstruction and pancreatitis. Complications occur when worms gather in other areas of the body. They may cause blockages, inflammation, or other damage.

Not all people with ascariasis have symptoms. Blood and stool samples are a far more accurate way of detecting roundworms. Abdominal X-rays can also be used to diagnose the disease.

If your doctor diagnoses roundworm, he may recommend additional tests. Advanced imaging can show:

Such tests might involve CT scans, ultrasound, or MRI. The extent of your infestation can also be determined by endoscopy. This involves placing a small camera inside the body.

It is important for your doctor to determine how long you have had this condition. That way he can evaluate your risk of complications.

Whilst this is the ideal situation, you may well have a struggle on your hands in the UK getting your doctor to even investigate parasites.  And if they do, many laboratories are so unaccustomed to testing for parasites they tend to miss them.  You may recall a case I mentioned earlier when a client who had passed a large Ascaris (it was more than a foot long) during a colonic was told by their GP to not worry as they would only have the one.

What To Do If You Think You May Have Ascaris

How To Protect Yourself Against Ascaris